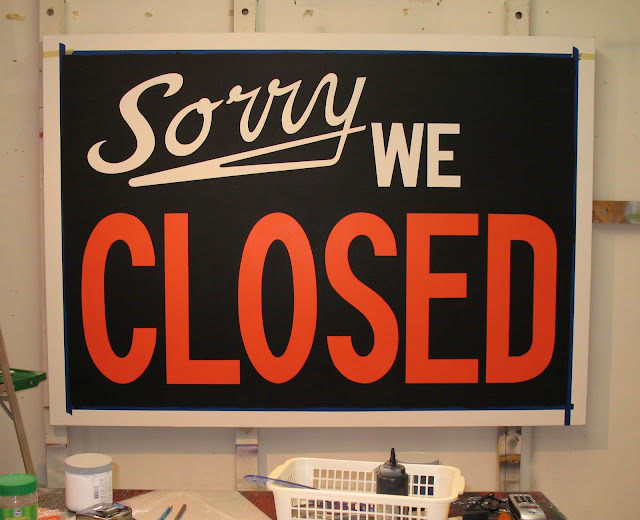 A national controversy erupted in the mid 1990’s over the proposed use of Ebonics (African
American Vernacular English) in public schools in California.  The issue fomented interesting debate from linguists, and virulent diatribes from racists.

At the time, I had a classic sign posted in my studio that read “Sorry, We’re Closed”.  In solidarity with the pro-Ebonics movement, I blacked out the contraction “We’re” to read “We”, and in late 2009 I made a painting of that sign.  Sorry, We Closed.
Posted by rachel hecker at 9:51 PM 0 comments

Email ThisBlogThis!Share to TwitterShare to FacebookShare to Pinterest
Labels: sorry, we closed 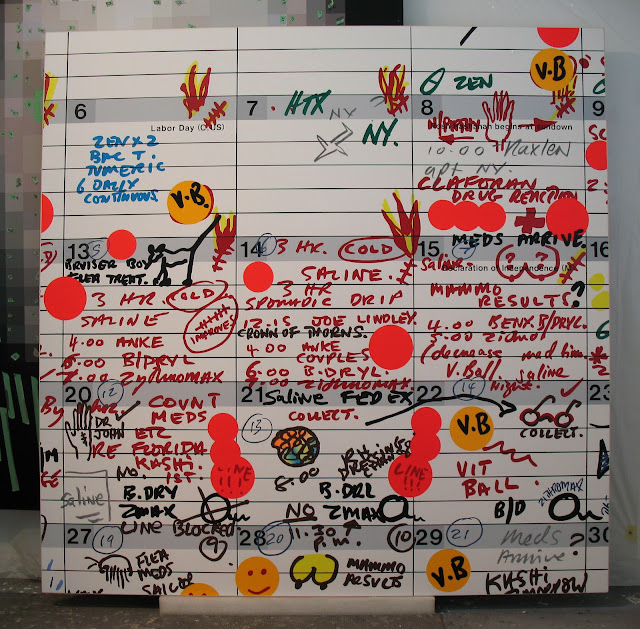 GT Calendar Section, 2010 acrylic on canvas, 72” x 72”
My good friend Gabriela Trzebinski keeps a desktop calendar to manage her Lymes medications, record her symptoms (which she then has to report to her doctors), and schedule related appointments.  She has systems for color-coding texts and round stickers that correspond to her symptoms, and pictographs (fire, brains, hands, airplanes, fleas, etc) that are a form of visual shorthand.  She can look at any calendar entry from past 11 months and report exactly what was going on with her body and mind on that day.
Gabriela didn’t begin the calendar as a form of art making, but she has increasingly recognized it as an intrinsic form of visual expression that has become an art form.  In this way, the painting that I made (above) of a section of one of her pages is collaborative.  It is the first large-scaled painting that I have made of diaristic material that is not my own.
This painting is a recreation of a section, and I hope that when translated into painting at an amplified scale, the correlation is made between effort and subject matter, and there is equity.


The original calendar pages are complete and amazing works unto themselves, and you can see them at:  www.gabrielatrzebinski.org
Posted by rachel hecker at 9:44 PM 0 comments 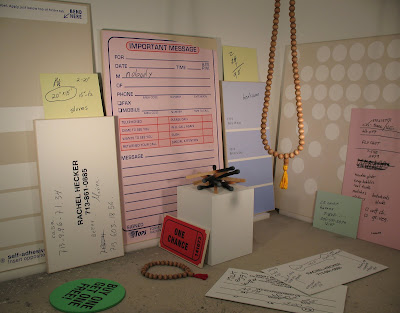 For the past several years, I have been making paintings of my hand written lists, notations, appointment cards, half-used sheets of stickers/labels, and other accumulated paper detritus. I am interested in the unselfconscious nature of the imagery and the unintentional poetry, and how these collections become inadvertent diaries of how we exist in the world, exposing foible, banality, repetition, desire, expectation, habituation, ritual, hopefulness and doubt. I refer to this work as painting for convenience, but I approach and think of it as sculpture. What I am trying to do is to remake rather than represent things. Given this criteria, I prefer to present the work relationally, fully cognizant of space, and resisting the stasis of the wall. The work seen below- while made up of 40 component parts - was not complete until it was installed for a show that I did in 2009 at Texas Gallery in Houston called “my world is really small and you are in it.” The work was stacked against two long facing walls. Here are two installation views:


I still make these paintings when something strikes me as particularly poignant, but I also find myself moving towards images that question painting in general, and my sense of repetitious failure in particular. When I finish a piece, and I am always disappointed that it is “just” a painting or a sculpture or a drawing. I expect the work to do something that it can’t do - to resist its own inertia. I don’t believe in objective reality, so the things that exist as matter - including my own work - appear as the props of phantasmagoria. What is interesting to me now is the fact that I continue to make work (with respect and love) that can only end in failure, and I am taking this on more directly in the form of content. For example, I am working on paintings that I call “Paintings that Do Something”, which I interpret as a non-sequitur, and I recently tried to “rescue” a portrait that I painted of my brother by implanting it with natural eyelashes, as a way to enliven it. 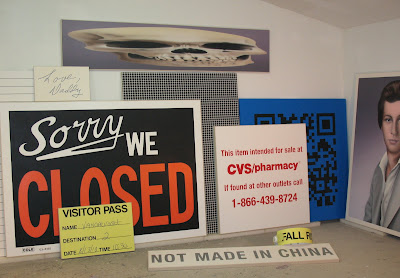 I carefully hand-paint as an act of redemption - I am trying to save the image. (I do not use vinyl stencils, printmaking, or photomechanical processes). My investments of time and care reflect a belief that value is not endemic to any particular thing, but rather experienced, moment-by-moment. Slow painting is like turning the beads on a rosary. 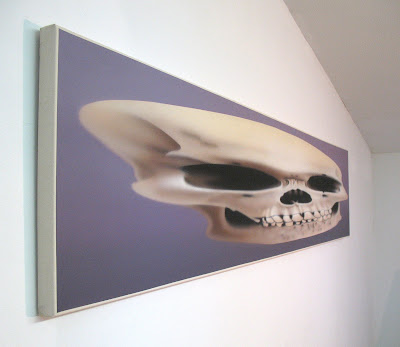 Paintings that do something / Anamorphic Skull, (detail: view from left), 2010
I have a complicated relationship to painting (the noun). I love its history and deplore its authority. I believe that its quaintness – as a gesture in the face of technology – is a great strength, and its torpidity an ultimate disappointment. I am interested in the enigmatic idea of “paintings that (actually) do something”. The skull can only be seen without distortion as the viewer moves towards or away from the image, changing the image and enhancing the metaphor. 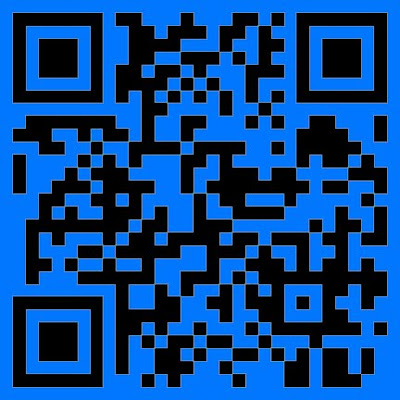 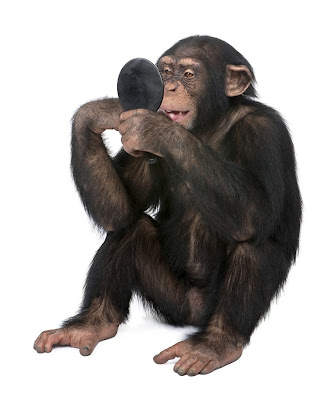 Paintings that do something / QR Code Painting and Embedded Image of Chimp Looking in Mirror, 2010

The QR Code (above top) is a type of bar code that I first imbedded with a photo of a chimp looking in a mirror (above bottom), then made a painting of that QR code. If you download a QR Code application (free) to your Smart Phone, you can hold your phone camera up to the painting and the QR Code reader will (within seconds) show you the image of the chimp. 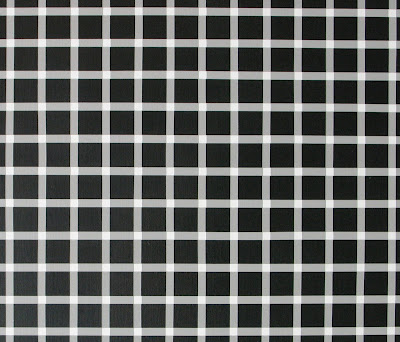 Above is a detail from Scintillating Hermann Grid Variation, 2009, acrylic on canvas, 72” x 54”, from “Paintings that Do Something”. This optical illusion is a variation of the optical illusion discovered by E. Lingelbach in 1994, which was a variation of the Hermann grid illusion, discovered by Ludimar Hermann in 1870. The scintillating grid illusion is characterized by random black dots appearing and disappearing at the intersections. You will most likely be able to experience this phenomenon in this detail from my painting. 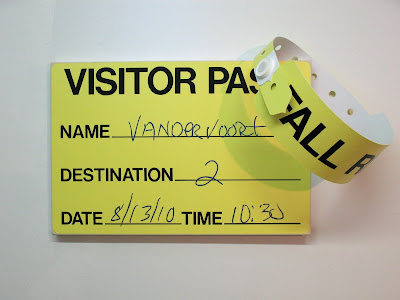 Visitor Pass, 2010, acrylic on canvas, 20” x 30” and Fall Risk Bracelet, 2010,
acrylic on polystyrene, 16” diameter x 6” x 1/8”
A good friend of mine was recently hospitalized. I try to remember what some people try to forget.
This gives me a heightened sense of exigency.


Visit my website at  http://www.rachelhecker.net
Posted by rachel hecker at 8:52 PM 0 comments